Misinformed fears of HIV infection—and denigrating attitudes and behaviours towards people living with HIV and people at much higher risk of acquiring infection—have been features of the HIV epidemic for decades. HIV-related stigma and discrimination continues to do harm by aggravating the HIV and other health threats that people face, and by obstructing people from acquiring the information and making use of the services they need to protect their health.

Legal systems in many countries are failing to protect the people that HIV responses are trying to reach. Criminalization of same-sex sexual relationships, sex work and drug use give license to discrimination, harassment and violence, isolating key populations and hindering them from accessing vital services. Overly broad criminalization of HIV non-disclosure, exposure or transmission also deters people from seeking to know their HIV status or from accessing HIV services.

that stigma and discrimination at health-care facilities—in the shape of denial of care, dismissive attitudes, coerced procedures or breach of confidentiality—remain disturbingly common. This discourages people living with HIV from knowing their HIV status and seeking care. Such poor treatment from health-care providers also makes it more difficult for people living with HIV to adhere successfully to treatment, achieve the sustainable viral load required for their own health and reduce the risk of transmitting HIV to others.

Across 13 countries with available data, the percentage of people living with HIV who reported being denied health services at least once in the previous 12 months because of their HIV status ranged from 1.7% in Malawi to as high as 21% in Peru and Tajikistan. Coerced medical or health procedures remain common, as do breaches of confidentiality by health-care professionals (reported by at least 15% of people in eight of 13 countries with available data). Significant proportions of people living with HIV also reported that their ability to obtain antiretroviral therapy was conditional on them using certain forms of contraception. 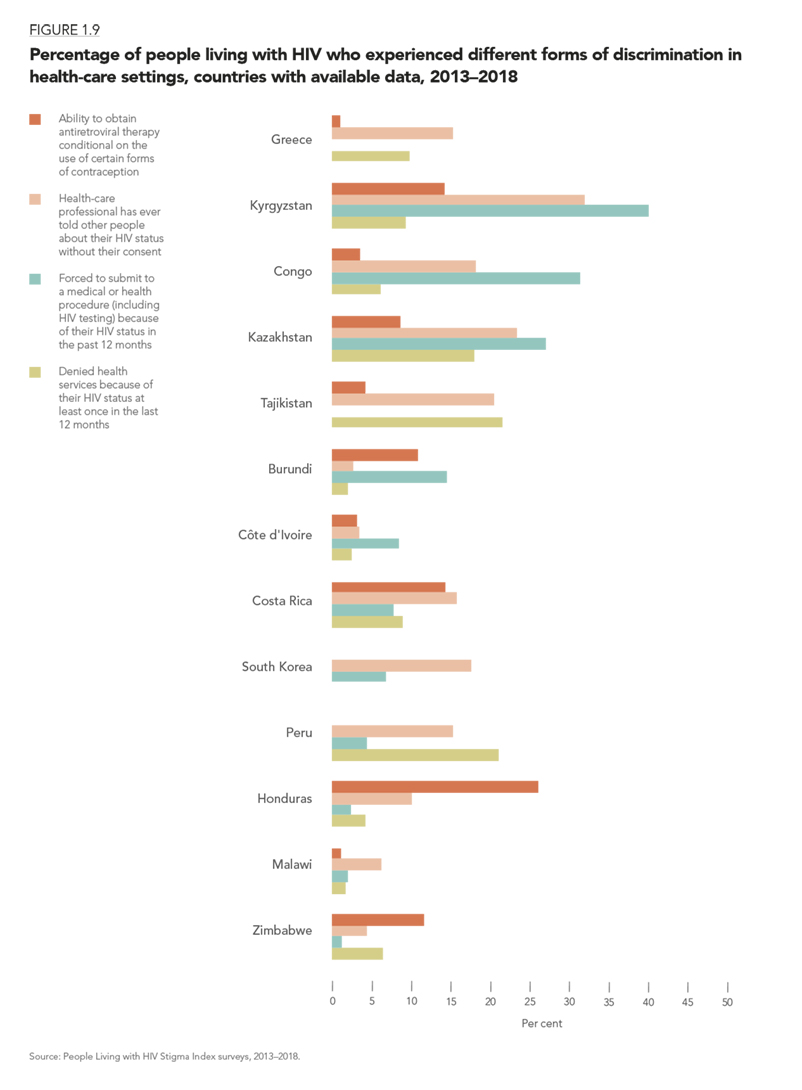