Strategies that have successfully controlled HIV epidemics have generally followed the principle that no one should be left behind. They uphold people’s rights, work with and take the lead from communities, and marshal strong political commitment and reliable financial support. They foster enabling legal, social and institutional environments, and they provide services that are tailored by and for the people in greatest need.

Alongside adolescent girls and young women, children living with HIV are often left without the support and services they need to stay healthy and build sustainable and enjoyable lives. People who inject drugs, sex workers, transgender people, prisoners and gay men and other men who have sex with men remain at elevated risk of HIV infection. People on the move and other marginalized populations, such as indigenous peoples, are often missed or ignored by health systems, leaving them vulnerable to HIV and other health problems. When HIV and health services are unavailable or inappropriate, HIV prevalence in these populations can skyrocket.

Sustaining community-led services for key populations in Kenya and Malawi

Community-led approaches to reaching key populations in Kenya and Malawi with HIV and gender-based violence services are being adopted by national HIV programmes following the success of innovative projects.

The two countries are among more than 30 where the USAID- and PEPFAR-funded LINKAGES project has worked since 2014 to reduce HIV transmission among key populations and improve their enrollment and retention in HIV treatment and care. 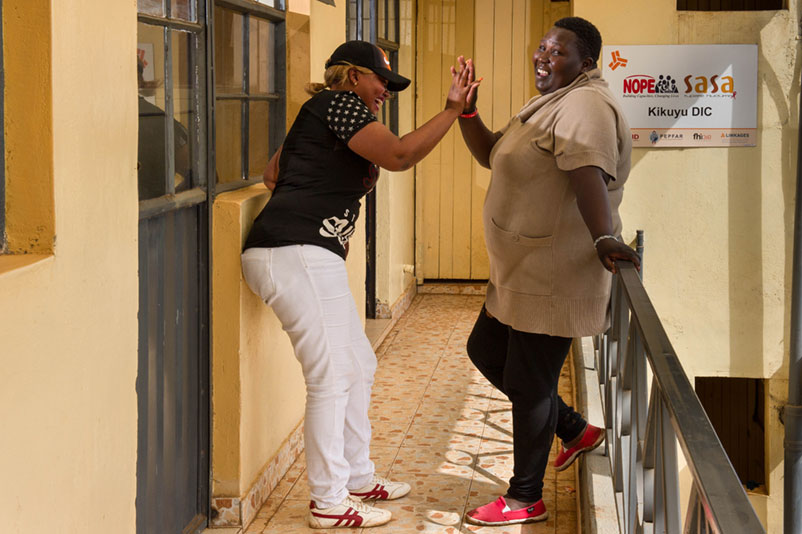 Programme details varied between the two countries, but the building blocks for success were similar. The technical and organizational capacity of local partners was developed, which enabled many of them to qualify for direct external funding and to manage projects. Drop-in centres were established, giving members of key populations safe spaces to gather and access HIV and other health services, including HIV testing and antiretroviral therapy. Key population community members were trained to support the operation of the drop-in centres, and local health authorities authorized the centres to serve as HIV treatment sites. Crisis response teams and procedures were introduced for screening, reporting and responding to incidents of gender-based violence against individuals who visit the centres. 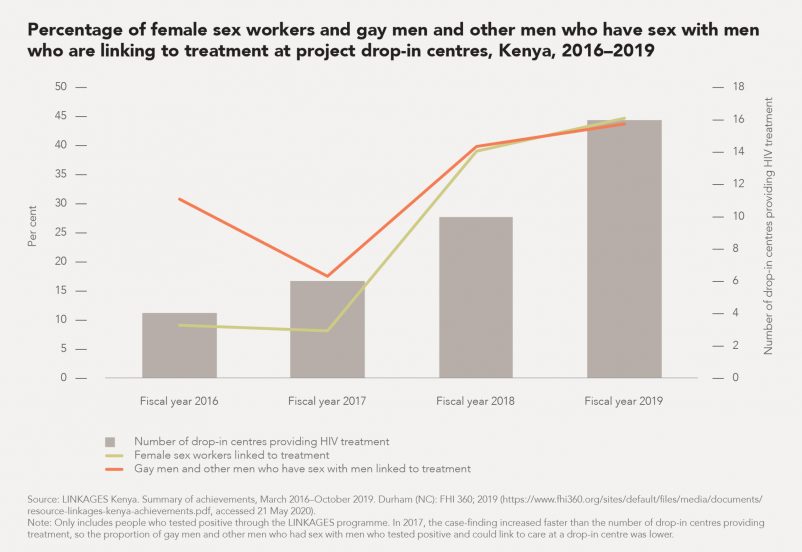 The project developed monitoring tools, such as unique identifier codes and a system that monitors the clinical service needs of key populations living with HIV and facilitates the scheduling of appointments for check-ups and viral load testing. Kenya’s Ministry of Health later adopted the system.

Those same tools are being used to implement Malawi’s viral load monitoring strategy. They show high levels of viral suppression among gay men and other men who have sex with men (86%) and female sex workers (93%) who are retained in care and receive their viral load test results. A system known as LINK was also introduced in Malawi to monitor stigma and discrimination against key populations at public health facilities, to identify the most key population-friendly facilities, and to guide training and sensitization interventions among service providers.

When the LINKAGES project in Kenya ended in September 2019, almost half of female sex workers and gay men and other men who have sex with men diagnosed with HIV through the LINKAGES programme initiated treatment at the drop-in centres. Working with the Bill & Melinda Gates Foundation-supported Jilinde project, LINKAGES also helped provide PrEP to about 9700 members of key populations in Kenya. The legacy of the project lives on at 35 drop-in centres run by local nongovernmental organizations, 16 of which operate as antiretroviral therapy satellite sites for county health facilities.