The funding gap for HIV responses is widening. Momentum established following global agreement on the Millennium Development Goals (MDGs) in 2000 has been lost in the SDG era. Increases in resources for HIV responses in low- and middle-income countries halted in 2017, with funding decreasing by 7% between 2017 and 2019 (to US$ 18.6 billion in constant 2016 US dollars). The total funding available in 2019 for HIV in these countries amounted to about 70% of the 2020 target set by the UN General Assembly.

Domestic investments in HIV responses in low- and middle-income countries have grown by 50% since 2010. This growth peaked in 2017 and then declined by 2% in the following two years (in real terms, adjusted for inflation). Financial support for these countries provided through the Global Fund to Fight AIDS, Tuberculosis and Malaria (Global Fund) increased by 26% between 2010 and 2017, but it then declined by 15% over the next two years, leaving a 7% total increase over the nine-year period. Bilateral funding provided to these countries by the United States Government—primarily through the United States President’s Emergency Plan for AIDS Relief (PEPFAR)—increased by 50% between 2010 and 2017 before declining by 8% over the next two years, leaving a 38% total increase since 2010. Contributions from other international sources have declined by 50% between 2010 and 2019. These trends reflect the fact that most bilateral donors have substantially reduced their contributions to the global HIV response in recent years. The United Kingdom of Great Britain and Northern Ireland, the second largest bilateral contributor of official development assistance for HIV, decreased its bilateral funding by 30% between 2017 and 2018, and then maintained the 2018 level of funding in 2019.

Further analysis of financial resource data shows how the mix of funding sources for HIV responses in low- and middle-income countries has changed significantly since 2010. The share of domestic resources grew from 47% of total funding in 2010 to 57% in 2019. Bilateral funding from the United States increased from 23% to 26% over the same period, funding from the Global Fund decreased from 11% to 9%, and funding from other international donors dropped from 20% of total HIV resources in 2010 to only 8% in 2019. 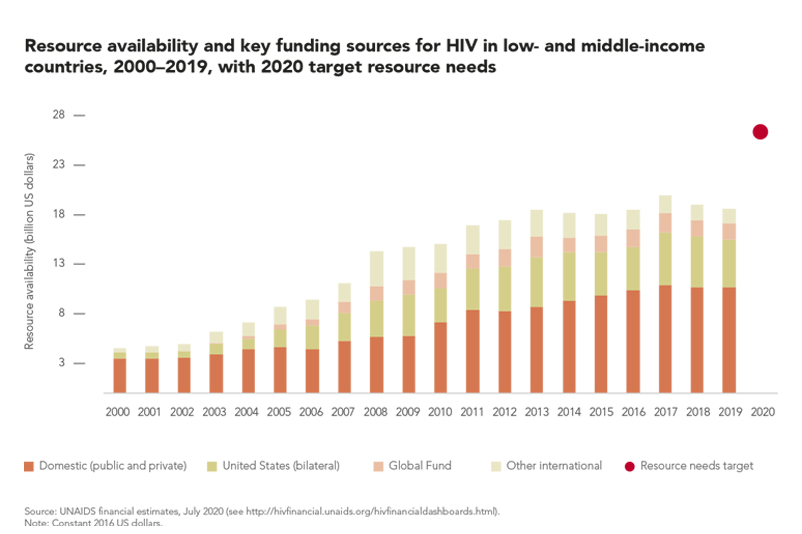 Over that same period (2010–2019), funding for HIV responses increased in all regions except western and central Africa, the Caribbean, and the Middle East and North Africa (see the region chapters for details).

In Latin America, where HIV responses are predominantly funded by domestic resources, total resource availability increased by 38% between 2015 and 2019. Total HIV resources available in western and central Africa, by contrast, decreased by 14% in 2015–2019, reflecting both a steep drop (59%) in funding from international sources other than the United States and the Global Fund and an 18% decline in domestic HIV investments. Global Fund and bilateral United States support became increasingly focused on sub-Saharan Africa between 2010 and 2019 (see Chapter 5 for additional analysis). The regions with the largest shares of the overall resource gap in low- and middle-income countries in 2019 were western and central Africa (32%), Asia and the Pacific (26%), and eastern Europe and central Asia (17%).

Large shares of HIV response spending in low- and middle-income countries go to HIV testing and antiretroviral therapy. UN Member States recognized in 2016 that HIV prevention efforts required greater attention, leading to a global commitment to spend a quarter of HIV response resources on prevention. The percentage of total spending needed for evidence-informed primary HIV prevention programmes varies from country to country, depending on the number of people living with HIV in the country, the per person cost of antiretroviral therapy and other variables.4 In Myanmar, spending on HIV prevention that focused on populations in greatest need accounted for most of the 24% of total HIV spending that went to primary prevention in 2017. In South Africa, the country with the most people living with HIV on treatment, spending on primary HIV prevention in 2018 was about 9% of total HIV spending. In addition, some countries continue to spend significant proportions of their HIV funding on less effective forms of HIV prevention.