The estimated 1.7 million people [1.2 million–2.2 million] who acquired HIV worldwide in 2019 marked a 23% decline in new HIV infections since 2010. This was the lowest annual number of new infections since 1989.

However, progress on the prevention of HIV transmission remains far too slow, with the estimated total number of new infections in 2019 more than three times higher than the milestone of 500 000 that was set for 2020. An increasing number of countries are making remarkable progress, but many more are failing to adopt proven methods for preventing HIV infection at the required scale.

The global decrease in new infections is driven by substantial reductions in new infections in eastern and southern Africa (a 38% reduction since 2010). Reductions were also achieved in the Caribbean (29%), western and central Africa (25%), western and central Europe and North America (15%), and Asia and the Pacific (12%). By contrast, the epidemic continued to grow in eastern Europe and central Asia, with new HIV infections rising by 72% between 2010 and 2019. There were also increases in the Middle East and North Africa (22%) and Latin America (21%).

A majority (62%) of new adult HIV infections globally in 2019 were among key populations and their sexual partners. These populations—which include sex workers, people who inject drugs, prisoners, transgender people, and gay men and other men who have sex with men—constitute small proportions of the general population, but they are at elevated risk of acquiring HIV infection, in part due to discrimination and social exclusion. 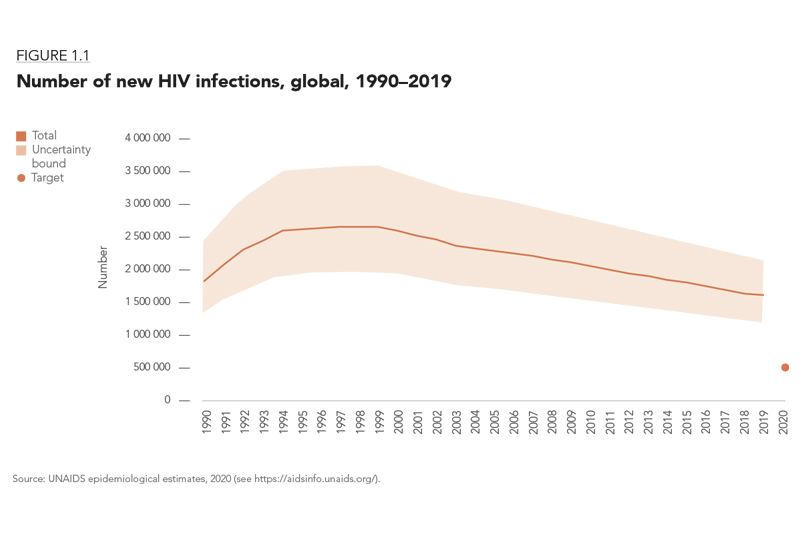 HIV risk among adults is higher among specific ages, genders and subpopulations by region, depending on the type of epidemic within the countries, cities and communities of the region. In sub-Saharan Africa, adolescent girls and young women (aged 15 to 24 years) in particular are at higher risk of HIV infection: they accounted for about one in four new infections, despite comprising only 10% of the population. In the region most affected by HIV, eastern and southern Africa, adolescent girls and young women accounted for 30% of new infections.

Outside of sub-Saharan Africa, men accounted for the majority of new adult HIV infections in 2019, ranging from 57% in the Caribbean to 79% in western and central Europe and North America.

Approximately 10% of new adult HIV infections worldwide were among people who inject drugs. This population made up almost half (48%) of new infections in eastern Europe and central Asia, 43% in the Middle East and North Africa, 17% in Asia and the Pacific, and 15% in western and central Europe and North America. An estimated 8% of new adult infections globally were among sex workers of all genders, while transgender women accounted for a small share of new HIV infections worldwide but disproportionally large shares of new infections in Asia and the Pacific (7%), Latin America (6%) and the Caribbean (5%). 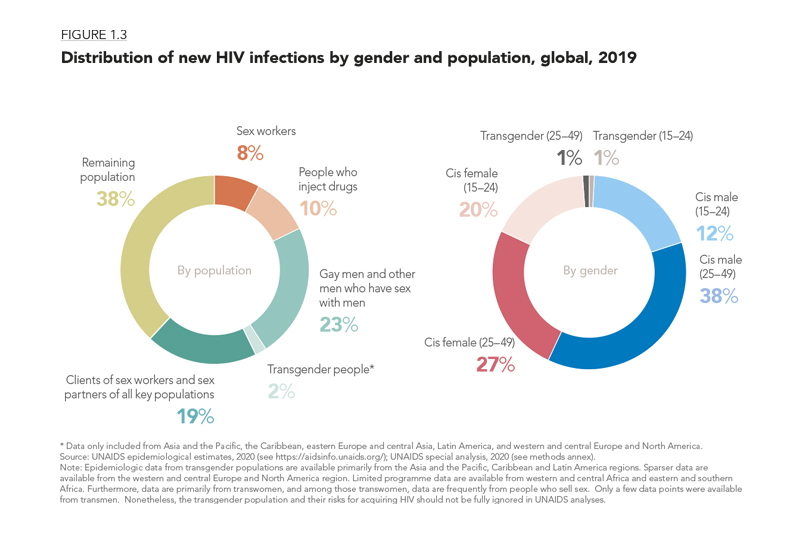